Whilst returning home from a recent pilgrimage to a local retail paradise, feeling battered and bruised (physically due to the crowds and fiscally due to the seemingly endless Christmas lists we’re expected to fulfil….), I approached a ludicrously complicated junction. It’s not quite as bad as Swindon’s infamous Magic Roundabout in the bonkers-stakes, but not far off. Best described as a roundabout-crossroads-slip road mash-up, it seems to both confuse and infuriate drivers in equal measure. Far too many drivers get flummoxed by the mind-boggling road layout and dart across lanes without warning. Coupled with a seemingly endless crawl towards the lights, the whole place is awash with impatient drivers. The impatience manifests itself in the form of either amber-gamblers as the lights change to red or aspiring dragsters spinning it away from the start line before green has appeared, all eager to take any chance to get away from the place as soon as they can.

Wanting nothing more than an easy ride home swiftly followed by a cuppa and a biscuit, my heart sank as I approached. None of the traffic lights were working. I steeled myself for a lengthy delay, accompanied by a cacophony of car horns and a flurry of explicit hand gestures. On that subject, why is it that irate drivers always seem so keen to mark their fellow road users out of ten? And why do they only offer a score of either 1 or 2? Occasionally, I’ve even been on the receiving end of a zero! 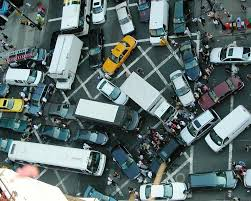 However, as I crawled towards the junction, I realised there were actually no queues. Traffic was advancing in all directions, albeit slowly and tentatively. Drivers were clearly paying attention to other road users and were prepared to be patient and give way. The only hand gestures I saw were people waving others through, swiftly followed by a corresponding wave of gratitude. I even saw smiles, not snarls.

I passed through the junction without issue and it actually felt as if the whole process was quicker than usual.

As I drove away, it made me think. All the “normal” control measures had been removed, but everyone navigated the situation perfectly safely – and in many ways, most were better off for it. No-one was taking unnecessary risks to nick a few seconds or gain an advantage. Instead, people were working together to maintain a safe environment.

I’m not embarking on some quest advocating removal of all traffic management on our highways. That would be madness. Traffic lights, pedestrian crossings etc. and the protocols for using them are vital to safe traffic and pedestrian movements.

However, I started considering this situation in the context of the workplace. When health and safety management focusses too much on rules and procedures and relies too heavily on engineering control measures, it can stop people from thinking for themselves – and lead to similar levels of risk (and exasperation) that I see at my mega-junction. Those that perceive health and safety “rules” to be over-complicated will be confused about how to apply and follow them. Others will feel compelled to take risks in order to get the job done, sometimes thinking they’re perfectly safe due to the workplace equivalents of traffic lights and don’t need to contribute to their own safety at all.

Just as taking away traffic lights would be disastrous, stripping away guards, scrapping procedures and banning PPE in favour of just “taking more care” would lead to catastrophic harm.

But my encounters with the dodgy junction demonstrated something vital to any workplace with aspirations to stop people being harmed. 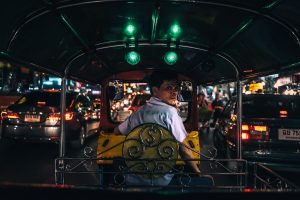 Faced with hazardous situations, most people will instinctively know how to behave to keep themselves and others safe – providing they take responsibility for identifying they’re at risk and take the time to consider how to proceed safely. Most injuries occur because people want to get a job done, and they put their head down and get on with it – without stopping to consider if there are any risks and how they can address them. If we can demonstrate that we trust our people to do the right thing, support them in taking the time to stop and think about their surroundings and the work activities underway, they’ll be able to decide how to proceed safely. It’s a fundamental part of an independent, and then interdependent, culture. It’s not easy to develop but it’s worth it. Talk about health and safety in simple terms, empower people to take ownership of the hazardous situations, praise them when they get it right and educate them when they don’t. This approach is the bedrock of our philosophy and is at the centre of the culture change workshops we deliver to everyone in our client organisations.

If we all adopt that approach, everyone is more likely to get home in one piece – and then they can all put their feet up with a cuppa and a biscuit. Just as I did. Chocolate Hob-Nob, by the way.