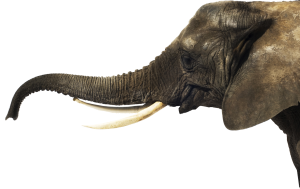 Giants of Leadership – A Testimonial

I worked for a company that took safety to it’s heart and had many young manager with high potential making their way through the management jungle to the high temple of executives….One day I was asked “Vince, how are we going to get our principal of safety first over to this management group?”…that was the question!

Do you ever get the sense that moments in time are pre-planned by a higher force?

The day before, I had been talking with Rob Coyle of Lattitude Productions and he was excited at the new film they had completed….Giants of Leadership – The Nature of Safety…this was it, this was what I needed!

I had plenty of time to plan and organise my delivery to the top 180 managers in a company of 6000 employees, delivering a brief introduction on our safety performance and then showing the film.

I had an idea – I would ask colleagues in Bangalore to buy 200 small carved elephants. I had a plan, now to put it into action…

It wasn’t going to be easy convincing senior managers to relay a film on safety that was 11 minutes long to an audience of senior managers. There was a drive to deliver the numbers for safety as I was following the Financial Controller for the business. the thoughts were that the numbers would flow consistently for one subject to the other. Again, I had a plan. I had two advocates of safety in the senior management team, one of them was the Financial Controller and the other my boss, the Director of Operations. I explained what I had in mind and how this would pan out…we agreed 15 minutes, not to be sniffed at and I gratefully accepted.

The day arrived and everyone was present in Singapore. I had 200 small hand-carved elephants and I placed them on tables; one for every manager. I gave a brief introduction that focused on our success in safety and how they, as managers and leaders, played a vital role in sustaining our success.

A three-minute introduction, during which everyone was questioning the elephants in the room! Roll the film! For 11 minutes you can see 180 managers drawn into the story. They watched and they took to heart what we were saying. At the end of the film I asked that they lead safety in every area they operate in, share the film with their direct reports and finally that they visibly display, on their desks, the carved elephant before them…to remind them that they are the custodians of safety in the company.

The managers took these qualities into the workplace to continue to sustain and improve safety…and every day the manager is reminded by the giant on the desk of what is needed to be an active and strong leader in safety.