The 6th July marked the 25th anniversary of the horrific accident on Piper Alpha that lead to the deaths of 167 men. That day in 1988 devastated so many lives. For the survivors, family, friends, and all those who were connected to the North Sea oil platform, the consequences of a failed safety system will stay with them forever. 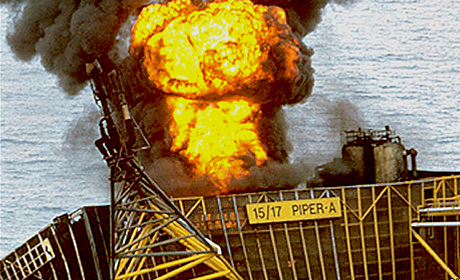 The dangers of offshore rigs have often been highlighted, and the procedures in place to prevent such an accident have since come under scrutiny. The event sparked a massive overhaul in offshore safety. A lot of work has been carried out in the last twenty five years to prevent this happening again, but there is still much to be done. The causes and timeline of events including the explosion and subsequent fire have been pieced together after the event. The films Spiral to Disaster: Piper Alpha and Piper Alpha: Human Price of Oil, both from the BBC Disaster Series show how it all unfolded.

Oil & Gas UK held a major offshore safety conference last month to mark the 25th anniversary, to reflect on the disaster and review the changes that have taken place in offshore safety since. There was also a remembrance ceremony held in Aberdeen over the weekend, where so many of those affected gathered to pay their respects to those lost. Watch the ceremony here. It is important that lessons are learnt from this terrible accident, so that it will never be repeated. Piper Alpha is a constant reminder that everyone is responsible for other people’s safety as well as their own.