Toby Jones is a name you see often these days. A quick search online reveals why. His lengthy filmography and varying roles are more than impressive. He has been appearing in films steadily for twenty years, beginning when he played a valet in 1992 film Orlando.

Since then, he has been in a huge number of block-busters, including the Harry Potter series, Snow White and the Huntsman, and Tinker Tailor Soldier Spy. His most recent project, to portray the dark genius Alfred Hitchcock, included him sitting in make-up for four hours each day, while a team of artists applied a prosthetic face.

Thankfully, he took the time out of his busy schedule to narrate Lattitude’s All For One – The Meerkat Way, and we feel very privilidged to have worked with such a friendly and talented man.

Now a best-seller, All For One has been translated into 14 different languages, and is used by companies around the globe. Toby’s voice is heard by thousands of people every week, in safety training emphasising the importance of teamwork and co-operation.

Meerkats have only survived in the Kalahari desert because of their overwhelming safety instinct and complete awareness 100% of the time. All For One – The Meerkat Way has been proven to transform safety culture by using this same approach and drawing inspiration from nature.

These are just a few of the safety awards won by companies using All For One – The Meerkat Way in their training:

It is a fresh approach to safety, delivered beautifully by one of Hollywood’s most versatile actors.

Read more about All For One – The Meerkat Way. 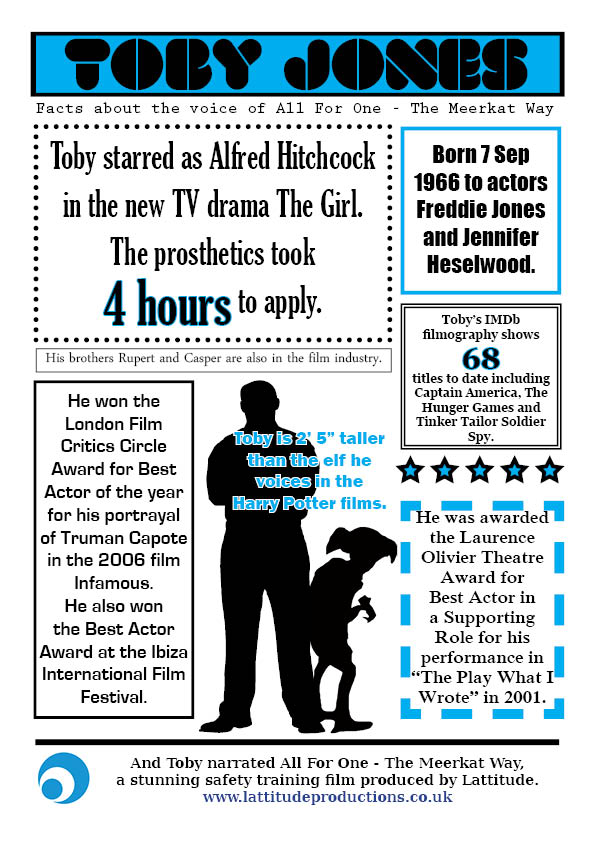